Super Hero Avenger
Kamala Khan aka Ms. Marvel is a teenage superhero, who is also the youngest member of the Avengers. She is Voiced by Kathreen Khavari.

She appears in the episode "School of Hard Knocks" where she was sent by Iron Man to investigate a private school and runs into and team-ups with Spider-Man. 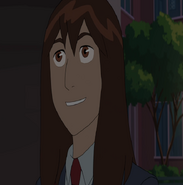 Add a photo to this gallery

Add a photo to this gallery

This is The First Time Ms. marvel Has Been Featured As a Teenager Alongside Peter Paker's Spider-Man

Peter's Unsure Feelings Towards Her is a Reference to How Peter and Captain Marvel (When She Was Still Known As Ms Marvel) Had a Brief Relationship in The Comics.

This is The First Time Miles Morales and Ms Marvel Have Met Each Other in Animation.

Due to the Guardians of the Galaxy Episode Back in the New York Groove Which Has Removed Ultimate Spider-Man From the Current Marvel Animated Continuity and Replaced it with this Series this Version of Ms. Marvel Appears To Be The Same One Featured in Avengers Assemble

Retrieved from "https://marvels-spiderman-2017.fandom.com/wiki/Ms._Marvel?oldid=6932"
Community content is available under CC-BY-SA unless otherwise noted.